If you would like to make an enquiry about staying at Viking Lodge Motel, please don't hesitate to contact us.

ANZAC PARK
Stop for a picnic and enjoy a stroll in native forest. 3km north of Norsewood, just off State Highway 2.

Kumeti Reserve
21km from Dannevirke at the end of Kumeti Rd. This reserve links to the Ruahine Forest Park. Public toilets are available here.

Ngapaeruru Scenic Reserve
Ngapaeruru Road is located 15km east of Dannevirke. A giant totara, said to be one of the largest in New Zealand, is a feature.

Pipinui Reserve - Makuri
This is a scenic reserve on the Coonoor/Makuri Rd, just 6km north of Makuri. There are glowworm caves at Coonoor on private property.

Ruahine Forest Park
Many huts for trampers, from 1 hour to overnight. Magnificient views.

Tamaki Reserve
At the foot of the Ruahine Ranges, 18kms from Dannevirke. Bush walks and picnic areas. This reserve also links with the Ruahine Forest Park.

Dannevirke Welcome
Prior to the arrival of the European settlers in the 1870s, the line of descent for Maori in the area was from the Takitimu/Kurahaupo waka. The tribe of the area is the Ngati Kahungunu/Rangitane, with geographic distinction to Te Rangiwhakaewa in the immediate Dannevirke region. The first known “Aotea” meeting house was established approximately 15 generations ago (from 2010) followed by the building of a marae at Makirikiri near Dannevirke at about the same time as the first Nordic settlers arrived from Napier and Hawke’s Bay.

The town was founded on 15 October 1872 by Danish, Norwegian and Swedish settlers, adherents of Scandinavism, who arrived at the port of Napier and moved inland. The settlers, who arrived under the Public Works Act, built their initial settlement in a clearing of the Seventy Mile Bush.

“The Dannevirke” after which the town was named is an extensive Viking-age fortification line in Denmark which had a strong emotive symbolic role for 19th-century Danes, especially after the site had fallen into German hands in the German-Danish War of 1864 – a recent and very painful event for these settlers.

The settlement quickly earned the nickname of “sleeper town”, as the towns purpose was to provide totara sleepers for the Napier-Wellington railway line. At one stage the area had 50 operating sawmills. After the native bush was cleared, the land was turned into pasture for grazing animals.

Totara College hosts the Dannevirke Garden and Craft Expo, an annual event that has grown to a considerable size.

The Australian politician and former Premier of Queensland, Joh Bjelke-Petersen, was born in Dannevirke (extract from Wikipedia). 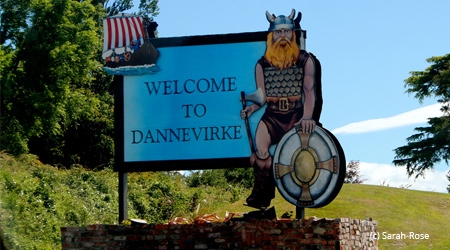